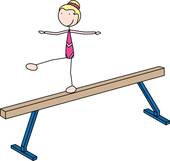 I like strong, female characters. I am one. I can mix cement, handle a chainsaw, and shingle a roof. I want my main character Emma to be able to do the same if the situation presents itself. I also want her to be a feminine, young lady who will grow up to be a confident, self-assured woman ready to take her place in the world.

When I put her in one position, I’m always thinking about the other. If Emma is staring down a belligerent moose in a nearly-frozen creek, I want her to win. She happens to be trapped there with Raz, so I have to remember that she’s a girl who wonders if Raz thinks she’s cute. She’s capable, but she’s a girl. She needs to sound like a girl, throw like a girl, and run like a girl, but I don’t want the fact that she is a girl to be detriment.
When Piper, Raz, and Emma’s friend Laura are playing a game of cards, it’s a good time to show Emma’s softer side. Her eyes can twinkle, her hair can be washed, combed, and free of the mud, twigs, and grass collected during the standoff with the moose. She can put on her favorite yellow sweater because she knows she looks good in it. She can win at cards because she’s got a brain and knows how to use it.
Balancing a friendship between two girls is much more complicated. Girls always seem to be competing over clothes, their looks, and boys. And they don’t always play fair. Laura has a crush on Raz and can’t keep her mouth shut about it. She’s not being malicious – Laura is just being Laura. Good-hearted, but kind of a dip stick. She and Emma have been best friends since they can remember, but they’re at that age where boys enter the competition ring. It’s a dangerous place where many friendships flounder and fail for the most trivial of reasons.
Emma can see this. She’s not as short-sighted as Laura. Raz lives in California, and he’ll be leaving with his dad at the end of the week. Emma and Laura live in Minnesota. Sure, there’s all manner of communication, but the geographical distance multiplied by their age, divided by their grades in middle school, and subtracted by the time of year doesn’t give any romance with Raz much of a fighting chance.
Emma’s got to figure this all out. She wants Raz to like her, but not too much. She wants to know that boys (in general) will pay attention to her. But she doesn’t want to have a crush on Raz because she knows he’s leaving and she remembers that she’s only eleven. Still, it is pretty darn exciting! And then there’s Laura. Emma feels her competitive side come out when the three of them are together, but she values Laura’s friendship too much to jeopardize it, even if Laura is clueless to what she’s doing. It’s sort of like riding a two-wheeler for the first time – you wobble and fall, and then you figure it out.