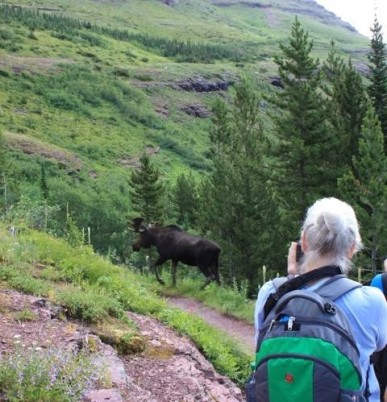 The setting for my middle grade mystery is northern Minnesota. There was no doubt in my mind that a moose had to play a part, had to be in the story somewhere. If you’ve ever lived in, or visited northern Minnesota, you’ll know that the décor usually reflects the breathtaking natural environment and the animals that live there — deer print pillows, pine tree-patterned quilts, and moose mugs. There may even be a mounted head watching you from an alcove or above a fireplace.

I wanted a moose in my story, but he had to be more than a setting element or a pretty face, my editor said. She shook her head, voted against the moose, and I almost took him out. I felt deflated and hollow at the prospect of a “moose-less” story, so I made a commitment to make his presence significant and relevant enough to move the story forward. He would be there, but he had to do more than just look the part. He had to pull his own weight.

And, he does, but I’m not going to give too much away by divulging all of the places he appears, and the various roles he plays. The title of the story pays homage to him (The Mystery at Moz Hollow) – “Moz” is the Algonquin name for “moose” (eater of twigs). He also appears in various forms, which helped me use him in numerous plot locations (sometimes it’s hard to convince a 1500-pound animal to go where you ask and stay put for an indefinite period of time).

Bottom line is, the moose stays. I don’t want to say I “won out” over my editor – she was right. If I wanted a moose, then he had to do his part to justify his inclusion. I rejoiced, corralled him from the nearby forest, and put him to work – temporarily. He’s been cooperative, for the most part, and will be released in time for the fall rutting season.